Next Move in Movement Disorders

A new research project has launched at the center of expertise Movement Disorders Groningen: "Next Move in Movement Disorders" (NEMO). The project focuses on the classification of hyperkinetic movement disorders, which are characterized by an excess of involuntary movements, including tremor, myoclonus, dystonia, tics, chorea, spasticity and ataxia.

Each movement disorder has its own clinical presentation, but frequently complex and variable mixed forms occur. Presently, the classification of involuntary movements is purely based on clinical definitions and thus, on expert opinion. However, research has demonstrated that it is difficult for neurologists to distinguish these disorders if they do not see such patients frequently, and also that doctors do not always agree amongst themselves. 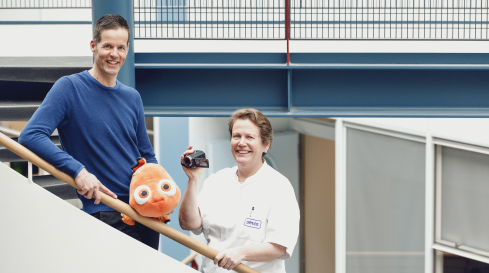 In this research project, we will determine whether medical doctors can be assisted by technology in the classification of hyperkinetic movement disorders. We are conducting an experiment where movements will be registered using a smart camera, movement sensors, and electromyography. These data will be integrated and used for pattern recognition analysis. Because of these technical aspects we are collaborating with ZiuZ B.V., who are specialized in the development and application of visual intelligence.

The aim of the project is to develop a ‘proof-of-principle’ of a computer aided diagnosis system (CAD-tool), that will help doctor to diagnose the right movement disorder in a patient. This way, patients could be diagnosed faster and more accurately in the future.  Moreover, the tool can also be used to establish the natural course of movement disorders, or to better evaluate the effect of treatment.

Currently, the research protocol is approved by the Medical Ethical Committee and over a hundred patients have participated in the project. More information about the project can be obtained through e-mail ([email protected]).